Kirti Stambh is one of the popular & busiest Landmarks in the city, which is located near Polo Ground. It is made out of pink Songadh stone and stands tall opposite Nehru Bhavan. The landmark was built to mark 60 years of rule of Maharaja Sayajirao Gaekwad III in the Year 1935. Perched atop the landmark is a lion that is facing eastwards.

Kirti Stambh is currently one of the busiest areas in the city as a bus depot is located just 100 meters away and also Circus, Exhibitions, Events held nearby the Pradarshan Maidan, just next to it.

Kirti Stambh, one of the most popular landmarks of Vadodara, is located near the Polo Ground. It was built in 1935 to commemorate 60 years rule of Maharaja Sayajirao Gaekwad III. The Stambh is made out of pink ‘Songadh stone’. It stands tall opposite to the Nehru Bhavan with a lion perched at its top and facing eastwards. Kirti Stambh is also known as the ‘Tower of Fame/ Triumph’.

Kirti Stambh carries a philosophical value as it depicts Sayajirao’s firm decision of renouncing the material, worldly life and thus, moving to ‘Vanprasthashram’ – the third out of the four ashram (stages) of human life where one hands over the worldly responsibilities to his/her next generation and takes an advisory role, thereby withdrawing from the materiality of the world.

The lion perched at the top of Kirti Stambh has his rear part/portion facing the Lukshmi Villas Palace Gate. This lion, with its rear part facing the Palace gate, marks the Maharaja’s departure from his Kingdom and Luxurious Life. Also, according to the Hindu philosophy, traveling towards east is considered to be a way of achieving ‘Salvation’ or ‘Moksha’ which is again indicated by the eastward facing lion of the Kirti Stambh.

If one examines closely, the countenance of the lion appears a bit old/aged and fatigued and it is about to get up and walk. The Maharaja wanted to portray himself through this aging lion. There is deep philosophy behind the structure made by prominent artist Krishnarao Chavan and his associates. In the erstwhile Baroda State, all the buildings and structure made by Maharaja Sayajirao III, carried some philosophical meanings blended artistically by the then master craftsmen of the Baroda State.

The Kirti Stambh, as we see it today, is one of the busiest areas in the city as a bus depot is located within a range of 100 meters. It stands tall amidst the fast-developing concrete structures/buildings around it. 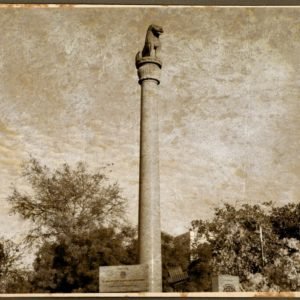 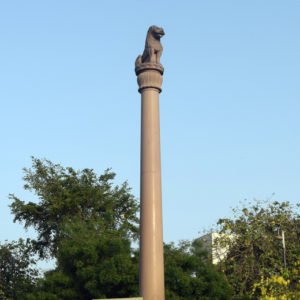 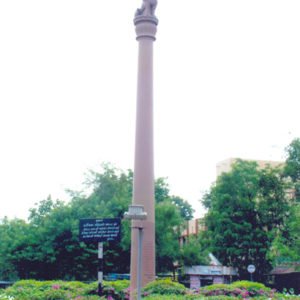