Makarpura Palace was a Royal Palace of Gaekwads, which was built by Maharaja Khanderao Gaekwad II in Year 1870, designed in the Italian style. It was supposed to be the Summer Palace despite the fact that the royal family spent most of their summers in the Nilgiris of Tamil Nadu.

The Palace was built as a Hunting Resort. Maharaja Khanderao Gaekwad II spent a lot of time hunting in a huge deer park near Dhaniavi area in Makarpura which was popularly known as Shikarkhana.

The three-storeyed palaces’ main feature was its Japanese styled 130-acre garden, which was designed by architect of Royal Botanical gardens, Kew, William Goldring, with a swimming pool and lake with swans. The garden had Italian styled ivory fountains which were activated to welcome the king. The Palaces has more than 100 rooms. The Italian styled building has ornate brick rooms with frame arch balconies and a wooden staircase leading to the first floor. Maharaja Khanderao Gaekwad’s brother Malharrao Gaekwad, who ruled Baroda from 1870 to 1875, destroyed a portion of this palace.

Later Maharaja Sayajirao Gaekwad III rebuilt and expand it for Rs 11.2 lacs in 1883 with Robert Chisholm.

The palace is the current home of the Indian Air Force that lies beyond military grounds.

Open hours today: By appointment only 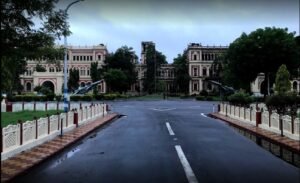 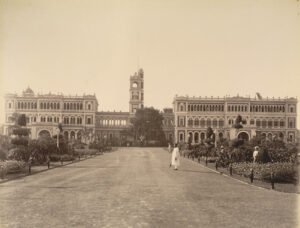